BY ROBERT ANGLEN
The Cincinnati Enquirer

A University of Cincinnati scientist has determined men have about 2 billion more brain cells than women.

While that might make men less susceptible to debilitating mental illnesses such as Alzheimer's disease and dementia as they grow older, it doesn't make them any smarter than women.

â€œIt helps explain why males have better spatial orientation ... if you give them a three-dimensional object to look at,â€ said Dr. Gabrielle M. de Courten-Myers, who worked with scientists at the University of Lausanne in Switzerland to count neurons in the cerebral cortex. â€œWomen have more advantages with complex languages.â€

She said having more neurons may help men solve problems or sense directions.

Dr. de Courten-Myers described the nerve cells in the cortex as a tree, and the synapses that carry information between cells as branches.

â€œThe male is more like a spruce tree, with lots of branches. The female cell is

more like an oak tree with strong branches,â€ she said.

But women may have the advantage early in life, she said, adding that more men are born mentally retarded and with learning disabilities.

â€œI believe this is because of the neurons, but I have not proved this yet,â€ Dr. de Courten-Myers said, ex plaining that neurons damaged before birth are unable to be repaired â€” leaving some men with dead or damaged branches.

She presented her findings â€” which were the focus of a 1999 article in the Journal of Neuropathology and Experimental Neurology â€” during a workshop on gender differences in the brain at the University of Cincinnati, where she has worked for 20 years.

Funded by the U.S. National Institute of Health and the Swiss National Research Foundation, the research team sliced up the brains of 11 cadavers and counted nerve cells sealed in beeswax slides.

They learned the average human brain has about 23 billion nerve cells. Males averaged 299,052 neurons per square millimeter on the surface of a brain slice about 3 millimeters thick. Females averaged 264,892.


COPENHAGEN (July 28, 1997 10:04 a.m. EDT) - Men have 16 percent more brain cells than women, but the extra gray matter does not make them any smarter, Danish researchers report.

Neurologists Bente Pakkenberg of Kommunehospitalet and Hans Joergen Gundersen of Aarhus University analyzed the brains of 94 Danes who died between the ages of 20 and 90.

Their final tally, reported in the Journal of Comparative Neurology, was that men have an average of 22.8 billion brain cells, compared to 19.3 billion for women.

"We were surprised by the difference," Pakkenberg told AFP. "We did not think it was so big, even though men's brains weigh more." That disparity is 150 grams, she said. 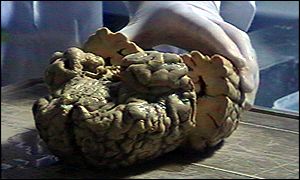 Men's and women's brains are different

W
omen's brains are more tightly packed with cells in the area that controls mental processes such as judgement, personality, planning and working memory, researchers have discovered.

A team from McMaster University, Ontario, Canada, found that women have up to 15% more brain cell density in certain areas of the frontal lobe, which controls so-called higher mental processes.

The cells are found in areas that make connections with other parts of the brain, such as the limbic system which is thought to play a major role in the emotions.

However, as they get older, women appear to shed cells more rapidly from this area than men. By old age, the density is similar for both sexes.

Researcher Professor Sandra Witelson said it was not yet clear what impact, if any, the difference had on performance.

However, she suggested that the difference might account for the fact that women are ten times more likely to develop some psychiatric conditions such as panic attacks and anxiety disorders.

Dr Tonmoy Sharma, a consultant psychiatrist at Stonehouse Hospital, Dartford, UK, said the greater density of cells did not mean that women could out-perform men.

He told BBC News Online: "Women have smaller brains, but there is no difference in the mental performance of men and women.

"The greater density of cells could be one way by which nature ensures that women can perform adequately despite the smaller size of their brain."

Dr Sharma said it was possible that the fact that women shedded cells at a greater rate put them at a higher risk of neurodegenerative diseases.

Alzheimer's disease, for one, is more common among women. But he said there were many factors which could come into play.

Dr Richard Harvey, research director for the UK's Alzheimer's Society, told BBC News Online the fact that women lived considerably longer than men was by far the most significant factor.

The findings were presented to the Society for Neuroscience meeting in San Diego, US.